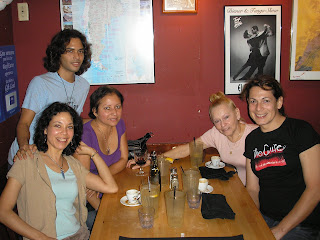 Sometimes, I think about the dozen or so blogs I meant to write but forgot, or about the six or so I actually posted and then deleted. (Maybe you were lucky or not to read the latter) Many times I felt it was a good idea but then suddenly I realized it was either irrelevant or just too personal. Tonite is one of such times where I think the points touched are quite personal. Maybe I will delete this soon, if I see too much info has leaked out, oh well.
This has been one of the most positive weekends this year. Not only was I not working, but I had time to enjoy the company of my family and the company of G's friends. Saturday nite, my mom invited me over to her house as usual, but we ended up in an Argentinian Steak House. She had brought along a friend of hers and her son, and since I knew beforehand they were going to be there, I went along with the plan.
Now, going to Mom's house is one thing. Usually I grab a pair of old jeans, a tee and pull my hair back in a ponytail. I do not know the extent of mom's trans awareness . Telling her and showing her pics is one thing but making her say Laura instead of the boy name she gave me is another story... Not that I really care, I love Mom dearly and I don't expect her to change pronouns for me. I talk to her almost every other day on the phone and most of the times, she just changes from he to her in almost every other sentence, LOL
Anyways, since we had guests and we were going out, I let my hair down, got my nice embroidered jeans, my new Cure T-shirt and the cute black and violet Ecko's Glenn got me and off I went. I don't usually wear make up around Mom, I kinda go by what she and my sister do, and if they don't wear it, then neither do I. Glenn decided not to go. Argentinean Grilles usually have tripe and blood sausage on the menu, and he didn't feel like dealing with the sight. It still kinda bothers me that he doesn't want to be around my family. I am pretty sure Mom and sis know we're up to no good :-P feminine intuition and all. I am not going to force him, besides we speak alot of Spanish and I don't want him to feel outta place.
We had a great time at the restaurant. When we all got introduced the young teen hugged and kissed me along with his mom. Now, in our Latino culture, we hug and kiss a female but we only hug and kiss dad or grandpa. A teen would be very uncomfortable doing it to someone like me in particular. Come to find out he is gay, so I felt very comfortable throughout the dinner. Both our guests were basically on my side during the whole time. It was very easy for them to explain to my mom I had just started my real life and that I should be supported because I was being so brave. I guess they had the impression I was kinda shy or ashamed of who I was, but it all changed when I told them I had never felt better in my whole life. That accepting who I was had been the first step in being happy with myself. I then realized I was actually proud of who I was and felt like I was glowing. We took a couple of pics, cuz of course, I was carrying my camera.

Glenn's friends tonite could have made an entire new blog, maybe I'll get to it later. We went to one of my favorite French/American restaurants in Ft Lauderdale. I knew they were going to be nervous and a bit uncomfortable. Not that they're intolerant or anything like that but they still have some issues they have to get over with. Glenn and his friends usually invite each other for dinner on their b-days. This year G put his foot down and said he was bringing me with him cuz it would be rude not to, living with him gives me such privileges. So I was a bit nervous and I did my make up a bit more detailed than on a friday nite out.
Which brings me to comment on how blah those Fridays at the bar make me feel these days. I do like chatting it up with the girls there, but when they start grinding each other while dancing to some bad music the dj puts thru the speakers, it makes me uneasy and uncomfortable. That is not what I want the mainstream patrons to see and give them an idea of what Transgender people are all about. Maybe I am just being anal, and shouldn't worry about it. Still, I think some decorum should be maintained.
So back to Sunday, all I can say is that wine makes everyone loosen up. Glenn and his friends were quite tense when we started, but eventually everyone relaxed.
I could tell one of G's friends was having a particular hard time looking directly at me. By the end of the night she was glancing and smiling at me but most of the time she had been looking in front of her. I got along with her husband alright. Quite a gregarious fellow, he kept the conversation going. His eye contact was constant. Glenn was quite tense at first, I know he was because he wouldn't look at me. I believe in the power of a smile. I know he looked at me once in a while and saw me smiling at him. He eventually eased up too. I can't say I was as nervous as I thought I would be. I always aced my mid terms and finals without studying much because I was not scared of them. I have always tackled bad situations at work with a straight(no pun intended) mind. I think one of my strengths is to keep cool in adversity. Even though, this was not an extreme case, the challenge was present. I am not sure what kind of impression I made to them but I was happy to oblige :-P
Posted by Laura at 1:35 AM

I love your attitude about transgenders projecting a positive image. There are vastly too many negative images and stereotypes, people with a heart like yours is just what we need. (Now about those other blogs ;) )

It was nice to see a more personal side of your life. Glad I got to see it. Thanks.

There's nothing wrong with having expectations within our community.

It's funny you mention test anxiety...like you, I never suffered from it at all. I rarely studied and after the test was over, didn't sweat whether I passed or not since it was out of my hands anyway. And yet I always did fine. I approach in a similarly reckless fashion and seem to be doing fine. I think maybe you're on to something. :)

Thank you for sharing some of your personal experiences. I know it helps me put some perspective on what I might encounter once I am out to friends and family, and how I can be cool and hopefully put the others at ease. I can imagine how uncomfortable it can be for those who just don't know enough about us, but as you said a smile can go a long way.

Seems like once we get a taste of "authentic living" it's impossible to go back to the status quo. That includes the bar scene. I'm delighted that you're so energized by living true to yourself. You're a shining example of how good life can be when we're courageous enough to stand up and be counted. Hugs amiga.

I'm glad that you have the love of a wonderful family supporting you; that makes life so much brighter in this world!

I am also very glad that Glenn "put his foot down" and that things turned out well there. I'd like to think that not only does love triumph over all but wins over all as well...

Lol my mom has trouble with the pronouns too. The downside is that she has done it at the softball field. It's a good thing I told Michelle beforehand.

I agree with the decorum thought. We can always get our freak on at the accepting clubs.

Something else to keep in mind is that you are very attractive and some people don't want to be rude by staring; not to mention a little bit of jealousy can be there as well.

Seems like everybody had a good time, Laura. Projecting a positive image is something I always try to do. 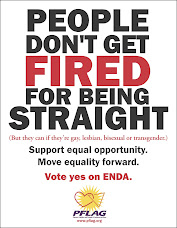 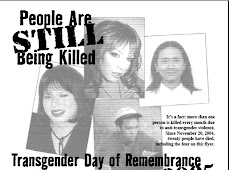